After completing nearly four dozen home-building projects, Pomona Valley Habitat for Humanity held its first-ever virtual dedication ceremony Saturday, Aug. 29, to celebrate finishing its 48th house. The home dedication was presented in video and can be accessed at habitatpv.org.

During the ceremony, keys to the rehabilitated 1914 Craftsman house at 331 N. Sixth Ave. in Upland will be handed over to the new homeowners, the James and Erica Beatty family.The Beattys lived in a small apartment in Rancho Cucamonga that offered minimal play space for the family’s four children, Aliya, Emma, Belien and Julius. Their new home is a four-bedroom house with a large backyard.

During the course of the rehabilitation of the house, the Beatty family has partnered with Pomona Valley Habitat for Humanity, far exceeding the usually required 500 hours of “sweat equity” required, according to a news release. Sweat equity can take many forms for partner families working with Habitat. It can mean construction work on their home or on a house for another family, cleaning up the build site, working in a Habitat ReStore, assisting in administrative duties and many other ways of helping out.

Pomona Valley Habitat for Humanity is part of a global, nonprofit housing organization operated on Christian principles that is dedicated to eliminating substandard housing through constructing, rehabilitating and preserving houses; by advocating for fair and just housing policies; and by providing training and access to resources to help families improve their housing conditions, according to the news release.

Pomona Valley Habitat for Humanity beginnings go back to October 1989 when 45 people met to consider forming a Habitat for Humanity affiliate in the Pomona Valley. In March 1990, the group decided to raise $5,000 to build a house in Tijuana, Mexico, for a Jimmy Carter Work Camp project, and at a July 1990 Steering Committee meeting, 11 people were named to form the Board of Directors. 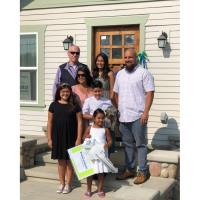